The most amazing conference in Zermatt and SkySails

Gunter Pauli invited me to a conference in Zermatt and it blew my mind more than any conference I’ve ever been to, really. On stage, 2 deals were signed, one for SkySails, the sail that pulls the Race for Water Odyssey boat.

SkySails go up to 100s of meters- the wind up there is really strong and it’s pulling a cord on a reel. The robot that runs it puts it into a sharp dive and brings it back down. Meanwhile, the reel is pulling the cable uses only 5% of the energy made.

They have a version under development for harvesting wind power on land (Sky Power). It’s just incredible and we want one here one day. It’s better than a windmill. 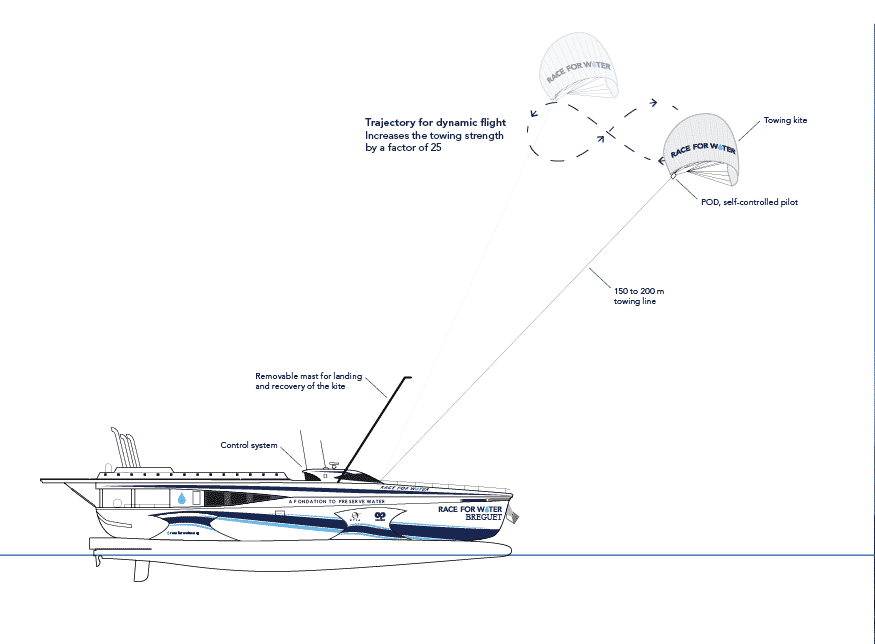 Instead of a traditional sail fitted to a mast, SkySails uses large towing kites to propel the yacht forward. Their shape is similar to that of a paraglider. The towing kite is made from high-strength, waterproof fabrics.

SkySails can operate at an altitude of 100 to 300m, where stronger, more stable winds prevail. The tractive forces are transmitted to the yacht via a line made of very high-strength synthetic fibres.

The launch and recovery system is installed on the foredeck and it manages the lowering and deployment of the kite wing. During launch, a telescopic mast unfolds the kite wing whilst lifting it. Once it is at a suitable altitude, the wing unfurls completely and can be launched. A winch releases the towing rope until operating altitude has been reached. The recovery process is performed in reverse order.

The launch and recovery procedures each take a total of 10 to 20 minutes.

This website uses cookies to improve your experience while you navigate through the website. Out of these, the cookies that are categorized as necessary are stored on your browser as they are essential for the working of basic functionalities of the website. We also use third-party cookies that help us analyze and understand how you use this website. These cookies will be stored in your browser only with your consent. You also have the option to opt-out of these cookies. But opting out of some of these cookies may affect your browsing experience.
Necessary Always Enabled
Necessary cookies are absolutely essential for the website to function properly. This category only includes cookies that ensures basic functionalities and security features of the website. These cookies do not store any personal information.
Non-necessary
Any cookies that may not be particularly necessary for the website to function and is used specifically to collect user personal data via analytics, ads, other embedded contents are termed as non-necessary cookies. It is mandatory to procure user consent prior to running these cookies on your website.
SAVE & ACCEPT
Powered by Ultimate Auction